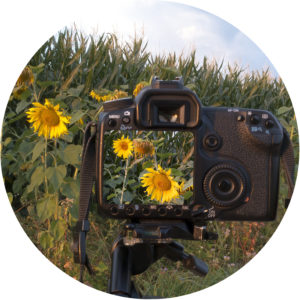 Taking photos of pretty flowers is fun, but there’s so much more that a photo can convey besides “pretty.” The best photographs instantly evoke a mood or feeling, or even call to mind a memory. The prevalence of digital and cell phone cameras has made it easy to take hundreds of “snapshots” in a short time; however, you can invite young photographers to dig a little deeper into the realms of artistry, technical skill, and communication via photos.

Often, first efforts at taking photos are disappointing because “it looked a lot better than this in real life!” To help youth explore how our eyes take in scenes and have them begin to “think like a photographer,” invite them to first spend some time sharpening their focus without using a camera.

Send students on a safari with a pad and pencil to find and note or sketch several objects or areas in the garden that grab their attention. Suggest that they look for something unusual, such as the shadows of branches on snow, the intricate patterns of fern foliage, or the gentle arc of the pistil on a daylily. All offer potential for dramatic photos. Ask, What about the image or scene sparked your interest? You might push their thinking further by asking them to describe colors, lights/shadows, shapes, textures, or patterns they noticed.

Next, give each youngster a cardboard frame at least 1” wide with a 4” x 6” opening. Have them return to their finds, this time to view them through the frame. Ask students to note the difference in how the scene or object appears when limited by the opening in the cardboard.

They should try shifting the field of view by moving closer to or further from the subject or moving the frame to include or exclude certain elements (e.g. shift so only the butterfly garden bed is in the frame, and not the parked cars). Ask, How does what is inside or outside the frame affect the quality or “feel” of the image? Suggest that they explore other aspects of the object or scene through their imaginary lenses. For instance, they might look at the same object from above or below, at an angle, or with light shining from behind.

Back in class, survey the group about how the framing exercise changed how they looked at and perceived the image they chose. After this discussion, ask how they might describe the photo they’d like to take and share with others based on this new information.

If the intent is to show the symmetry of an object, then placing it in the center of the frame enhances this aspect.

Pay attention to where the sun is and how it will affect the photo. If you’re facing the sun, the object of your photo may appear overly dark unless you adjust the camera for the brightness. If the sun is behind you, note where your shadow falls so you can make sure it doesn’t interfere with your shot.

Consider the balance of light and dark in a photo. For example, a close-up of a light-colored flower against a backdrop of dark evergreens will jump off the page more than the same subject against a field of similar flowers.

Having one object in clear focus and surrounding objects slightly blurred helps draw the eye.

Always be ready for the unexpected!